In case you haven’t already spotted it, we are delighted to be able to announce that – since March – the DadPad has been available to buy from Mothercare! By now, you should be able to find them in-store, but they can also be bought from the Mothercare website.  This is a really exciting development for us.

We are so very pleased to be part of the Mothercare story.

To help promote the DadPad, Julian attended nine Expectant Parent Events in Mothercare stores in April/May. He also managed to visit another five stores whilst travelling between events.  As usual, all the staff that he met made him feel very welcome. 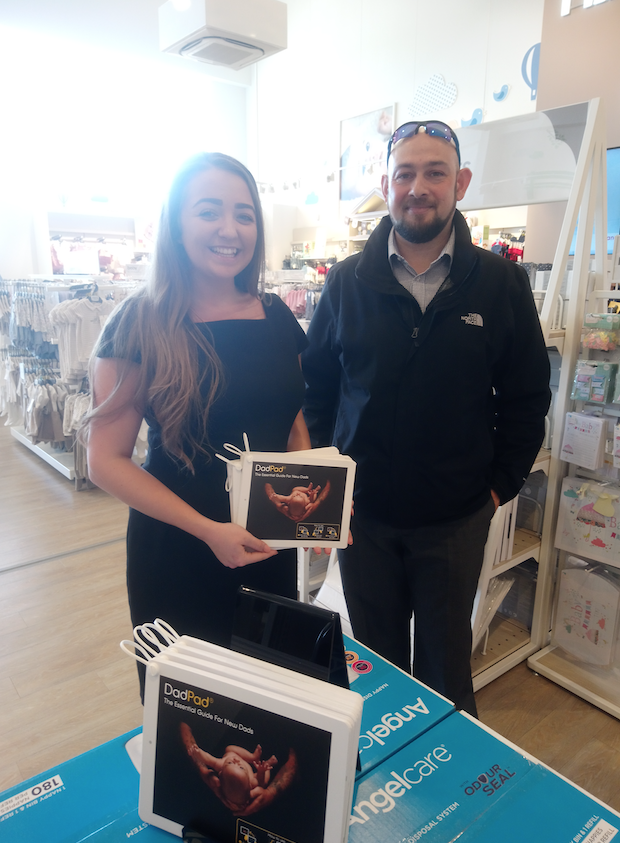 Julian at an EPE event in Rugby store.

As well as making contact with the expectant parents, these visits gave Julian the chance to speak with staff and management.  He was able to share his vision on how the DadPads could help the stores build ongoing relationships with male – as well as female – parents.  We were really inspired by the ideas that the managers and in-store colleagues already had on how they could use the DadPad to engage with dads-to-be whilst their partners were looking around the shop.

“I felt that Mothercare have really got behind our efforts to engage with and include dads in order to help themselves, mums and their babies, when they arrive.  Staff were keen to know about the mission and were relieved to have something in-store for dads that allows them to say how important they feel dads are.”

We are all really looking forward to DadPads becoming a permanent fixture at EPEs from now on.  Julian is already planning his next round of EPE visits, which will take place in June. He can’t get everywhere, though, so we’re really hoping that there will be advocates – or ‘Dadvocates’! – on hand in the stores to show the DadPad to dads-to-be.