This week – from 9th-15th October – is Baby Loss Awareness Week (follow the hashtag #BabyLossAwarenessWeek on social media), which aims to break the silence around pregnancy and baby loss.

For our Q&A post this month, we’re delighted to have had the opportunity to speak with Martyn Selley, from Ella’s Memory, which aims to provide practical help to parents of stillborn babies in Cornwall. 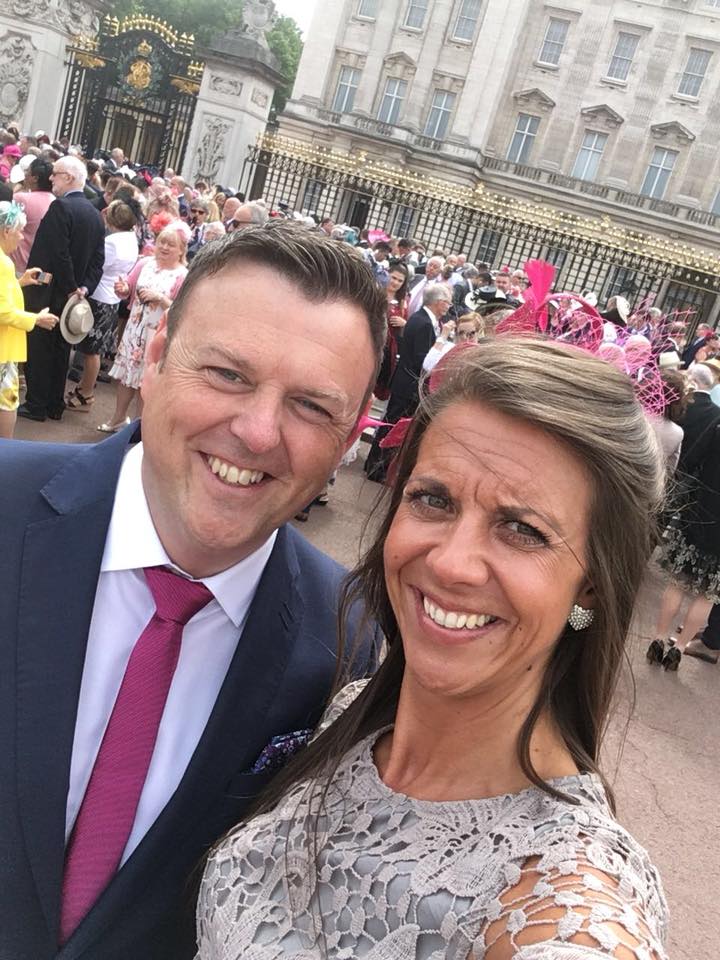 Martyn Selley and his wife, Emmillie, pictured last year at Buckingham Palace, where they had been invited to attend in recognition for all the work that they have done as part of Ella’s Memory. Since the loss of their second child, Ella, in 2009, the couple have gone on to have a further two children.

Hi Martyn. Thanks for chatting with us. Could you start by telling us a bit about yourself and Ella’s Memory?

The catalyst came back in December 2009, after my wife – Emmillie – and I were told that our unborn baby girl, Ella, had died. We came back to hospital the next day, and spent three days together in the Daisy Suite at Royal Cornwall Hospital Treliske. [The Daisy Suite is part of the Maternity Unit at RCHT, and is the only facility in Cornwall which caters for mums to go through labour and delivery after their baby has died. There are also facilities in place to allow the family to keep their baby with them for some time following delivery.]

Although the staff who looked after us were amazing, the Suite itself was in a poor condition: tired, dead and old. We soon decided that we wanted to donate or raise money in order for there to be some improvements made to the Daisy Suite, and it all started with around £700 that was raised at Ella’s funeral. We hit some snags when we tried to donate this to the hospital, though, as it could not be guaranteed that the money would go specifically to the Suite.

That was when I decided to take the project on myself. There then followed a huge wave of support – we ended up on the front page of our local newspaper, for example – and offers came from nowhere, with people wanting to donate to the fund or help us. Eventually, we decided to take on the whole project of the Daisy Suite, rather than just adding in a few bits. The CEO at the hospital at that time – Martin Watts – was very supportive, and basically told me to do whatever I wanted to do.

For those of us who’ve not been there, what is so special about the Daisy Suite? Why was it needed and what facilities does it offer?

For Emmillie, the biggest thing for us to achieve was a separate entrance to/from the Suite. Back in 2009, it had taken her two-and-a-half hours to gather the courage to not only leave the room, and our baby, behind but also to have to walk back through the maternity unit, with all of its sights and sounds, in order to exit to the car park. And we have achieved that.

The Daisy Suite now has a nicely furnished bedroom/living room, together with a large bathroom, kitchen and garden area. The garden is private, with a bench, flowers, and the separate exit/entrance. There’s mainline gas-and-air in place, to allow for deliveries to take place there.

We’ve also refurbished an adjoining room – Room 4 – which doesn’t have quite the same level of facilities as the Daisy Suite, but it is a really useful ‘back-up’ room if the Daisy Suite is already in use.

In addition to the Daisy Suite’s private garden, there is also a memorial garden with a memory tree, and I would say that that has been one of our biggest achievements. It gives anyone who has suffered the loss of a child somewhere to go – there are leaves on the tree remembering babies and children who died back in the the 1970s, and I hung another 15 leaves on tree over the weekend. 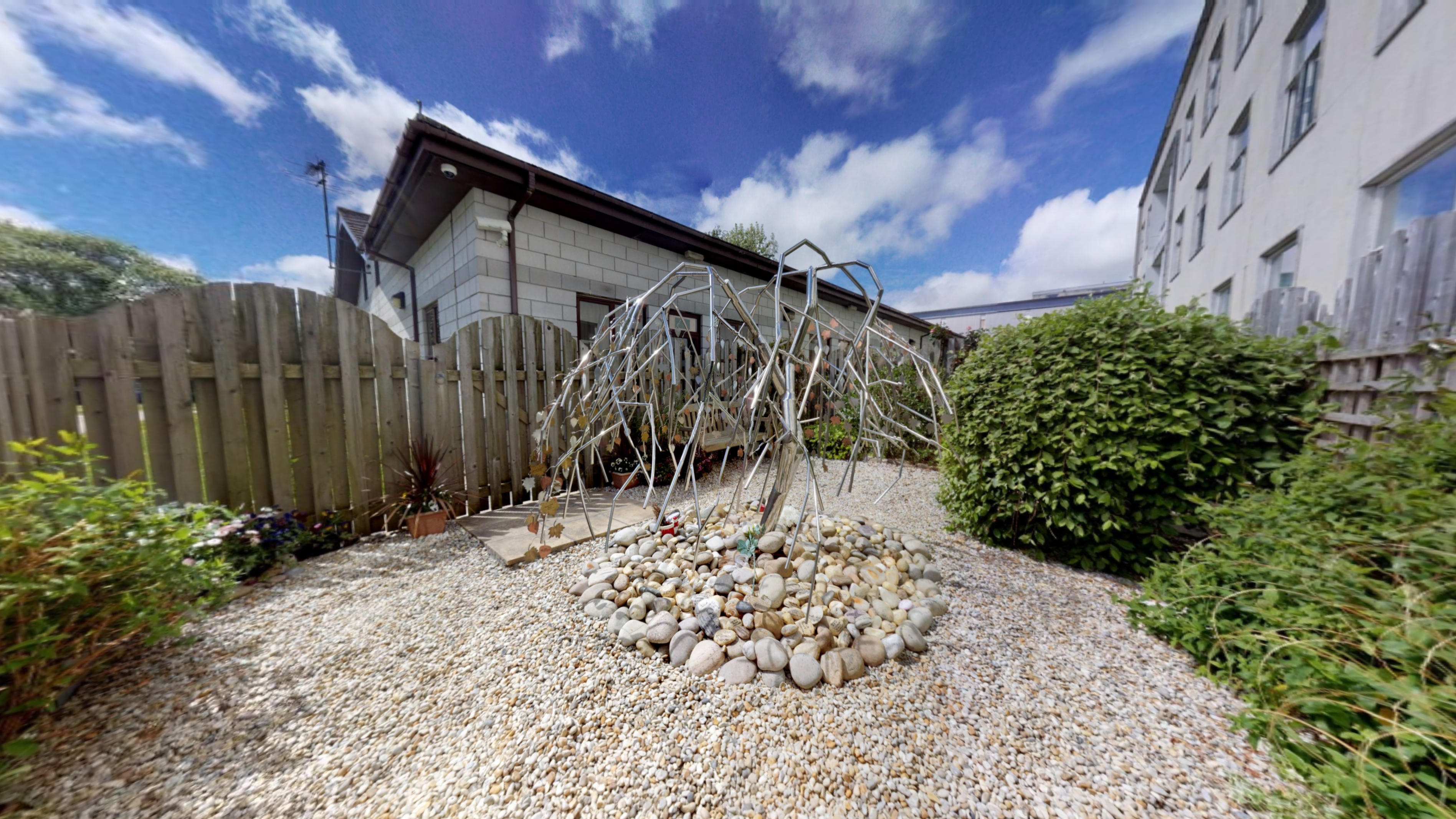 The memorial garden at RCHT, with its memory tree. Ella’s Memory funds each memory ‘leaf’ that is placed there, and a local engraver provides his services for free. The garden – and the private garden off the Daisy Suite itself – is maintained by a local volunteer.

One of the reasons we wanted to chat with you is because Ella’s Memory are now, of course, one of our ‘neighbours’ here at the Health & Wellbeing Innovation Centre (HWIC). Could you tell us a bit about the new Support Room and counselling facility in HWIC that has, again, been funded by Ella’s Memory?

This resource has been needed for such a long time, as post-bereavement counselling for stillbirths falls between two stools: once you have been released from the care of the midwives, there is often no-one around to pick you up. For several years, people have been asking me where they can go to get counselling in this situation. The previous option – of returning to the hospital, with all its associated memories, plus the sights, sounds, smells, etc, as well as a lack of privacy in some rooms – was not great. This room is ideal. It is near-to-but-away-from the hospital; peaceful, with lovely views, and no possibility of interruptions; comfortably furnished, with a feeling of space; and there is no clock. This was important for us – there is no sound of ticking, no feeling of being time-constrained. Appointments are spaced so that we can give people as much time as they need. 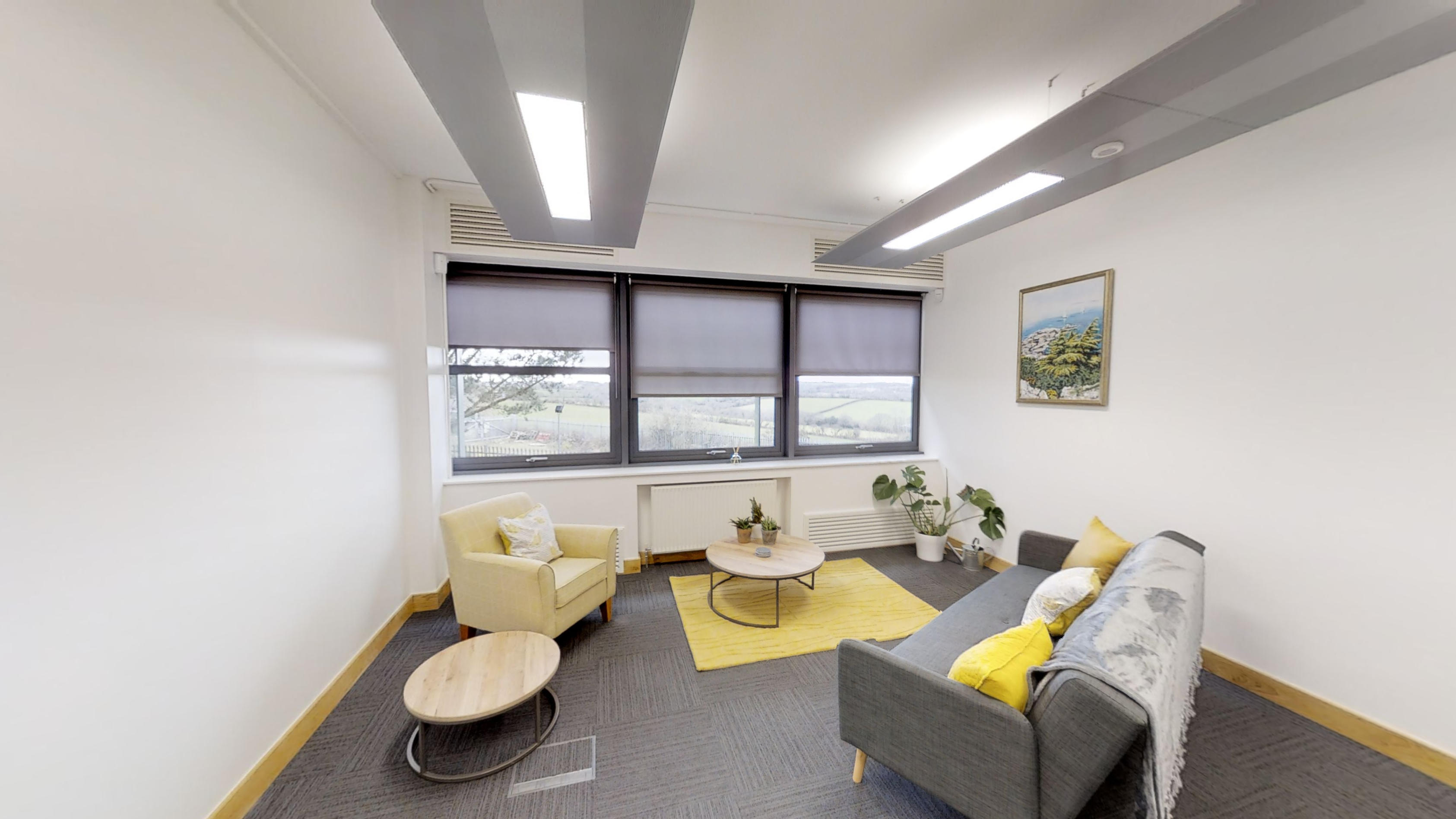 The Ella’s Memory Support Room at the Health & Wellbeing Innovation Centre in Truro has a tranquil setting and comfortable facilities for parents to be able to talk to a trained paediatric bereavement counsellor.

We’re also really lucky to have Helen, who is a specialist bereavement counsellor in paediatric loss. It’s important to have that expertise. All of this – the room, the furnishings, the refreshments, and Helen’s time – is paid for by Ella’s Memory. 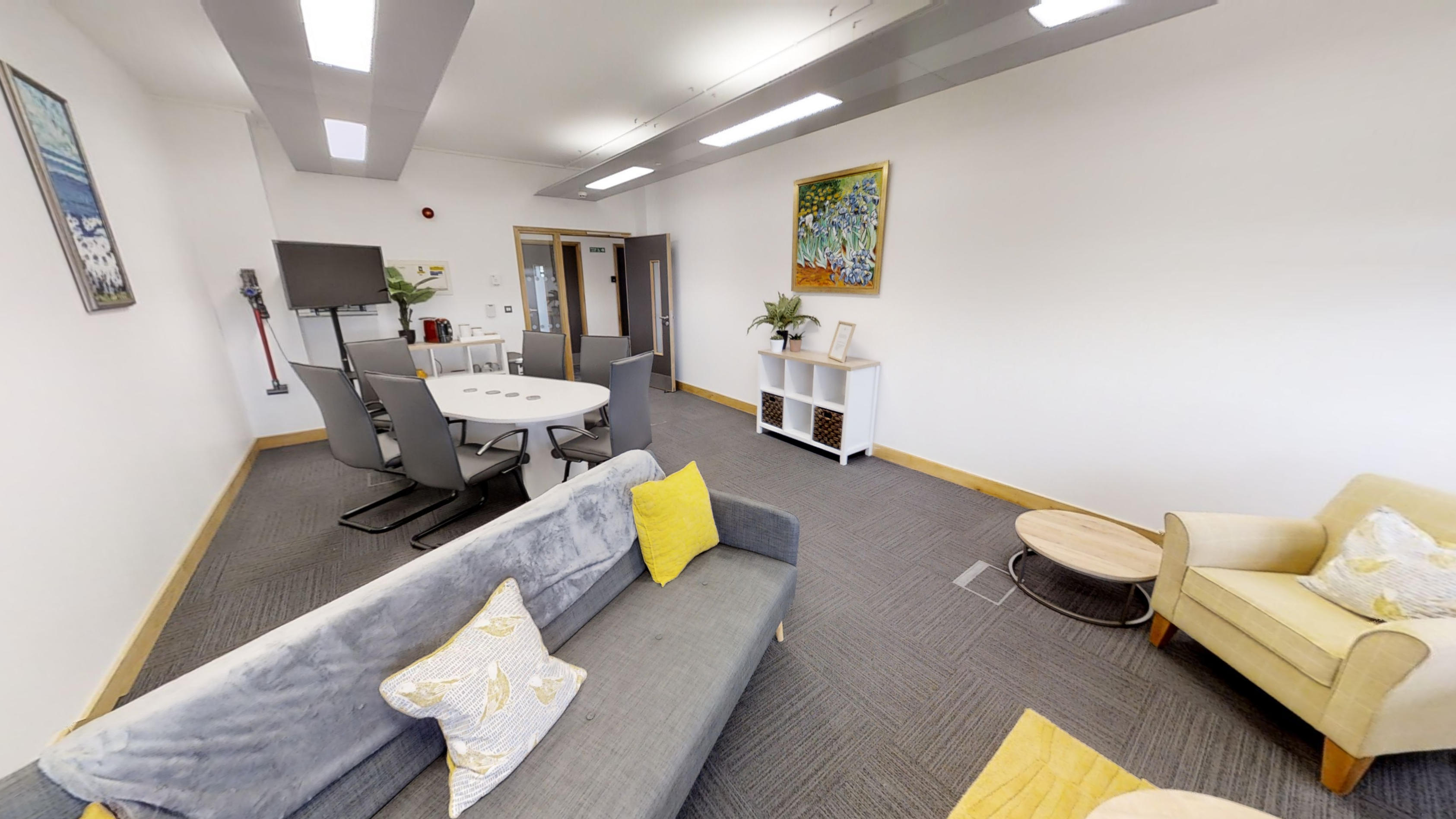 The Ella’s Memory Support Room, at the Health & Wellbeing Innovation Centre in Truro.

We’ve also made the room available for use by other, related services – such as the Birth Reflections team and also for families receiving post-mortem results – and to enable key personnel from the maternity team to meet and plan improvements in a quiet, peaceful setting where they will not be interrupted.

One thing that we’d specifically like to ask you about – if that’s ok? – is your experience as a dad, following the death of baby Ella. Were you given opportunities to talk about your emotions and your feelings, for example? And were there any organisations or support groups that you found to be especially helpful and would recommend to others?

Quite simply, no support was offered to me. Groups – and rightly so – are always designed for mums, but not for dads. Dads are deemed as being ok; the assumption seems to be that they’ll talk with their mates down the pub (which, of course, they generally don’t), and that they’ll make do and get on.

There needs to be provision for dads to talk about things. You will see your partner going through some awful stuff , plus you may have other children who will also be grieving, and on top of all that you’ve got to deal with your own grief.

Another difficulty is that the baby’s siblings can often get overlooked. Penhaligon’s Friends were incredible, though [Penhaligon’s Friends are a Cornish charity, supporting bereaved children and young people, parents and carers, across the county]. At that time, they usually only saw children who were four years old and over, and – although our son was still three at the time – the counsellor came out to see us and agreed to work with him.

This really helped the whole family. The best advice that we got from the counsellor was that, if your child asks you a question about the baby, tell them the truth. Be truthful. Don’t hide facts or lie. You should also be open with your children about your grief rather than – for example – hiding your sadness from them, as they will learn from you how to grieve.

Emmillie also found it hard to seek support, and this is common as I still have ladies who lost babies in the 1950s and 1960s telling me their stories. The good thing is that things are getting better and the support available is continuing to improve, with more literature is coming out to help in this situation. The Sands [Stillbirth & Neonatal Death] charity have published a book and a bereaved mum has also recently released a book, which should be good.

What advice would you give to a dad who finds himself today in the same position that you found yourself in, back in December 2009?

I think that the best advice that I received – from our family doctor – was to remember that people’s grief buttons will never be in sync with each other. You and your partner won’t be at the same stage of grief – things like anger, elation, resentment, jealousy, denial, acceptance etc – as each other. Therefore, it’s important to start each day by telling the other how you feel and you will then each know how to handle the other. This allows you to get through that day, and then you can deal with tomorrow when it comes.

And what about those around the bereaved dad – his friends, family, colleagues?

Talk to him, about anything. Don’t avoid the subject, but be there to take his mind off things if that’s what’s needed. Some hide their struggle, some don’t. 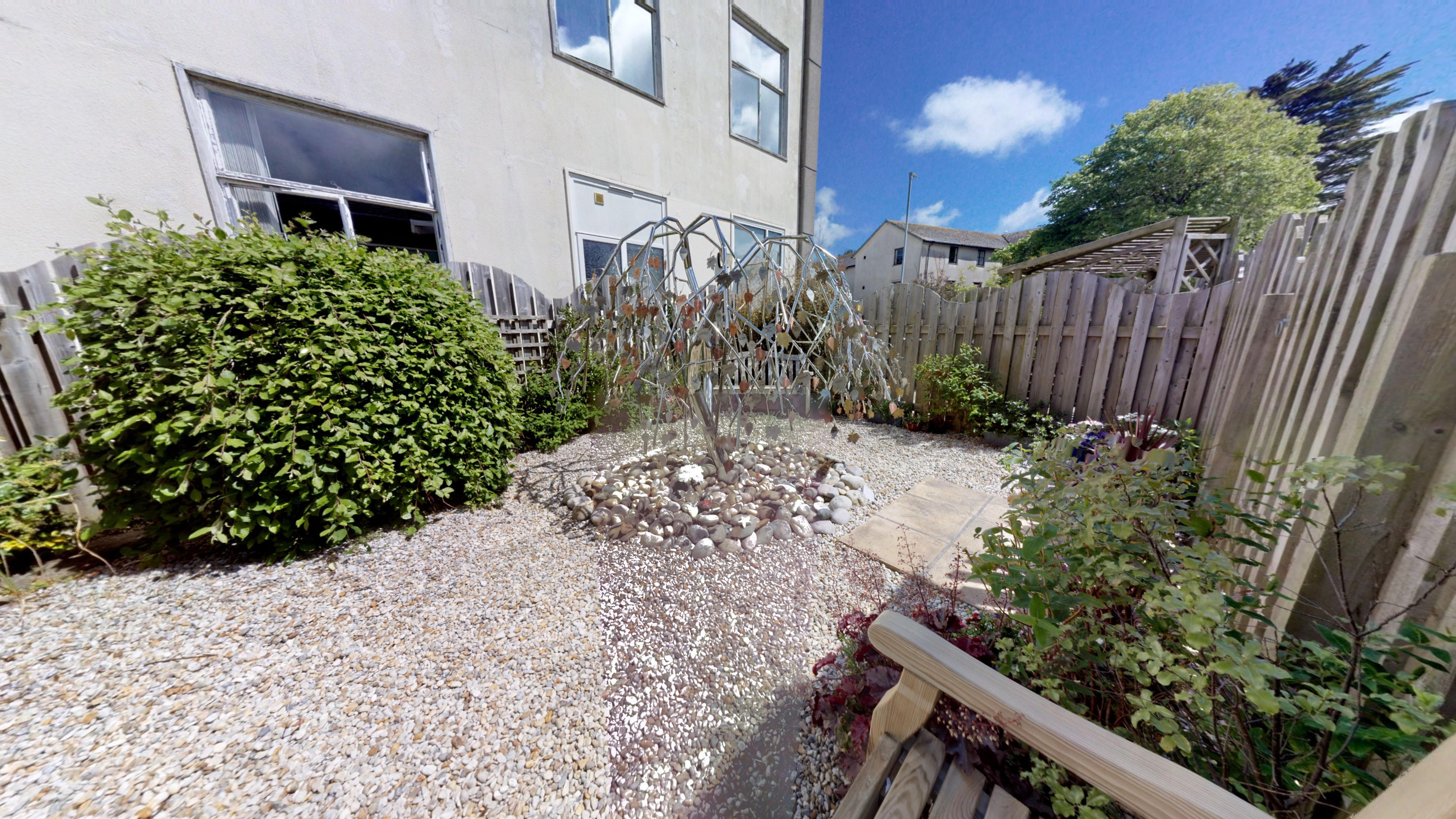 The memorial garden at RCHT, with its memory tree.

Finally, what’s next for Ella’s Memory? What are your plans and goals for the next few years?

Well, we are very proud with all that we have achieved so far, and for the fact that we have helped contribute to RCHT being renowned across the UK for the way in which the hospital handles this form of bereavement. RCHT is trying to get stuff right, and they are now one of the leading Trusts in the country for baby loss.

Going forward, changes will need to be made in the Daisy Suite, partly to keep all that we have done so far up-to-date, but also because there are plans in place to move the Maternity Unit from its current location. Therefore, any updates that we make now need to be future-proof, in order that they can be “wheeled across the road” when/if these changes happen. We don’t have any immediate plans for expansion, but simply to maintain the services that we currently provide – the Daisy Suite, the gardens and memory tree, and the counselling services and support room.

Thank you to Martyn, for giving his time to speak to us, for providing us with the lovely photos, and also for being so open about all that he and his family have gone through.

If you would like to donate to support the work of Ella’s Memory or Penhaligon’s Friends, you can do so by clicking on the links below:

You can find out more about the work of Penhaligon’s Friends and Sands via their websites, and Sands have also made available for download various booklets which offer support and information on a range of related topics.  The Penhaligon’s Friends website also contains a page of useful tips on dealing with a how a child or young person may be feeling, following a bereavement.

If you (female or male) have suffered a difficult birth experience and you feel you would benefit from having the opportunity to ‘debrief’, ask your GP, Health Visitor or Midwife if a Birth Reflections service is available in your area.